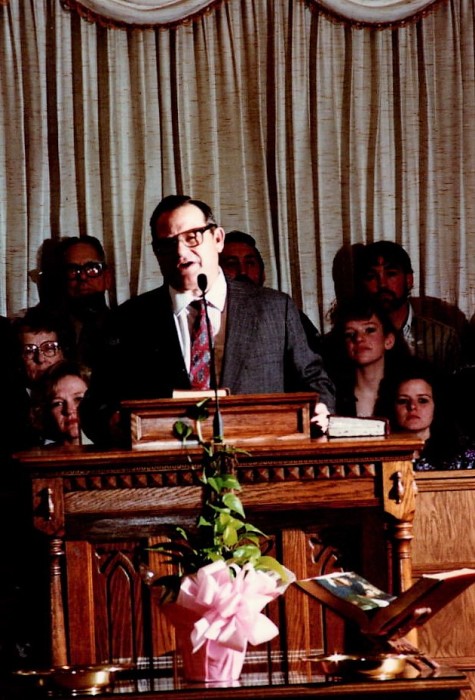 Pastor William Stewart "Billy" Sunday, age 81 of Montgomery died Sunday, June 17, 2018 in Montgomery. Stewart was born to the Late James Wilbur and Beatrice Durden Sunday ,May 24, 1937 in Pike County. He was also preceded in death by his 12 brothers and sisters. Brother Billy started preaching a the young age of 18 and continued until his death for a total of 63 years. Billy was a God fearing great man who loved his church and  his congregations at all cost. Preaching in a traditional Southern Baptist style he became known for his actions and deeds instead of how he preached.    A funeral service for Pastor William Stewart "Billy" Sunday will be Thursday, June 21 at 3:00 PM from the chapel of Green Hills Funeral Home with Reverend Clifford Matthews, Reverend Donald Hall, Brother Buddy Williams and Brother Eugene Best officiating. Burial will follow in the Bethel Baptist Church in Banks with Green Hills Funeral Home officiating. Visitation will be held Thursday June 21, 2018 from 1:00 PM until 3:00 PM at Green Hills  Funeral Home. Survivors include; wife of 54 years, Barbara Sunday of Montgomery, son, Kenneth Sunday of Daphne, daughters and son-in-law, Jeanine Loftin of Pensacola, Fl,  Bonita and Jonathan Rooker of d'iberville, MS, his grandchildren, Blaine Harper, John Scaife Rooker, Addy Loftin, Blake Sunday, Will Rooker and Maddox  Sunday, his great grandchild, Jace Brooks Harper, his sisters in law, Mary Sunday of Birmingham and Betty Sunday of Crestview, FL.  In lieu of flowers memorial should be made to the Wounded Warriors project, PO Box 758517, Topeka , Kansas 66675-8517. The staff of Green Hills Funeral Home is honored to serve the Sunday family

To order memorial trees or send flowers to the family in memory of William Sunday, please visit our flower store.