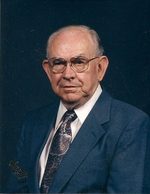 Mr. Lewis dedicated nearly 70 years of his life to being a salesman and worked at his trade until age 91. He proudly served his country in World War II and was a member of the First United Methodist Church in Troy, AL.

Donations may be made in memory of Mr. Lewis to the First United Methodist Church in Troy, AL.

Friends can sign the guestbook and order flowers at www.greenhillsfuneralhome.net. Green Hills Funeral Home is honored to serve the family of Mr. Lawrence K. Lewis.

To order memorial trees or send flowers to the family in memory of Lawrence Lewis, please visit our flower store.