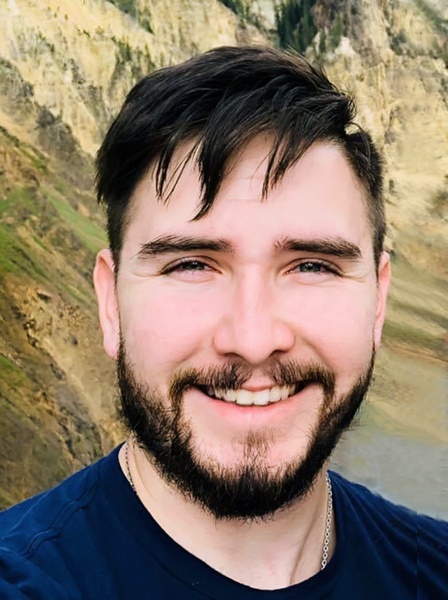 Kevin Carter Ryan, 26 years old, completed his mission in mortality on Tuesday, July 13, 2021. Those who were touched by Kevin's smiling eyes and his kind nature are invited to join with the family at The Church of Jesus Christ of Latter-Day Saints in Troy, Alabama this Sunday. Burial will follow at Green Hills Memorial Cemetery, where his body will rest to await a glorious resurrection in the Lord's time.

Kevin was a student at Troy University where he expected to graduate later this year with a degree in Bio-Medical Science and go on to medical school. He remembers, with love, all of his teachers and friends from Goshen Elementary and High School. He worked hard to earn his high school diploma through an independent study program at BYU. Kevin filled his life with friends at church, in the neighborhood and with his fellow trouble-makers in Boy Scout Troop 555. He earned the rank of Eagle Scout and, at age 19, he volunteered to serve a two-year mission for his church in Ukraine. Kevin tried to emulate the Savior by always being “a burning and a shining light” and sharing his love and testimony of Christ. While preparing for his mission and learning the language, he met the love of his life, Maria, and when he returned, they started their little family, which now includes one-year old Ethan Carter Ryan, who carries on his name and his smiling eyes.

Kevin has always been passionate about the people and things he chose to include in his life, always thirsting for knowledge and adventure. Water meant a lot to Kevin and was somewhere he always found himself at peace. His talents in the kitchen, his love for spicy food, tech gear and guns, and his willingness to share, made him everyone's go-to guy. His spirituality was bright enough to illuminate anyone's darkness. He was always defending the weak, being a friend to the lonely and wanted to heal the sources of pain in others, both physical and emotional.

To order memorial trees or send flowers to the family in memory of Kevin Ryan, please visit our flower store.