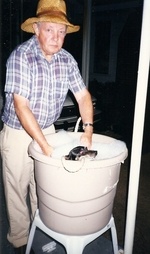 Mr. Brabham proudly served four years aboard the U.S.S. Brown. He was a member of the Perote Methodist Church, an avid dog lover and also enjoyed being a member of the Troy Domino Club. He retired from CSX Railroad after 37 years of service.

In lieu of flowers, the family requests that donations be made in his honor to the Williams Memorial Presbyterian Church or to the Pike County Humane Society at P.O. Box 1331, Troy, AL., 36081.

To order memorial trees or send flowers to the family in memory of John Brabham, please visit our flower store.