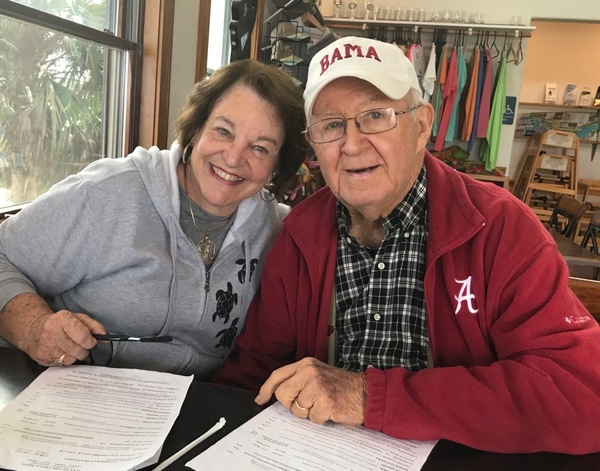 Jerry Lawrence “Larry” Johnston, Sr., age 84, of Troy, Alabama, passed away Monday, September 28, 2020, in his home surrounded by loved ones. A graveside service will be held Thursday, October 1, 2020, at 3 p.m. at Green Hills Memorial Cemetery with Reverend Steve Winton officiating.

The second child of Hubert and Helen (Helms) Johnston, Larry was born on September 24, 1936 in Brundidge, Alabama.

A gifted storyteller, he enjoyed sharing stories of his fond childhood memories with his children and grandchildren. These stories painted vivid pictures and details were rarely missed. Among his favorites to tell were his experiences on fishing trips alongside his father and grandfather, local characters and summers spent with his cousins in Laguna Beach, Florida. Those fishing trips instilled a lifelong passion that he would eventually share with his children and grandchildren.

A graduate of Pike County High School’s Class of 1954, Mr. Johnston furthered his education at the University of Alabama where he was a proud member of the Alpha Tau Omega fraternity.

In June of 1958, he married his childhood sweetheart and the love of his life, Helen Colley, in Troy, Alabama.  He absolutely adored his “YaYa” and often wrote her letters to express his undying love for her.  He enjoyed traveling and spending time with her at the farm and especially enjoyed vacationing at their second home in St. George Island.

In the early 1970s, Mr. Johnston founded Johnston Insurance as a career agent with Mutual of New York Life Insurance Company. Possessing a stalwart nature and a keen understanding of the industry, he provided life, health and group insurance benefits to thousands of cherished clients. Consistently recognized as a top producer, even achieving a top 3 national agent status with MONY, he annually received numerous accolades and was inducted into the esteemed MONY Hall of Fame. He was also a lifetime member of Troy Rotary Club and honored as a Paul Harris Fellow. He was a good and faithful servant and a committed member of the First Baptist Church of Troy.

He was known by many as the world’s best fisherman.  For those that were unaware of his fishing prowess, he would gladly tell them.  No matter where he fished or who he fished with, he always caught the most and usually the biggest, at least with his “scale”, without shame. He marveled at the beauty and strike of a giant Peacock Bass;  thus, he annually travelled over the past 30 years to South America and the Amazon River Jungle in pursuit of the exotic Peacock Bass.

The family is accepting flowers and charitable contributions can be made in his honor to the American Kidney Fund (11921 Rockville Pike, Suite 300, Rockville, MD 20852) or to the Hope Lodge (1104 Ireland Way, Birmingham, AL 35205). Friends and family can sign the guestbook online at www.greenhillsfuneralhome.net. The staff of Green Hills Funeral Home is honored to serve the Johnston family.

To order memorial trees or send flowers to the family in memory of Jerry Lawrence "Larry" Johnston, Sr., please visit our flower store.