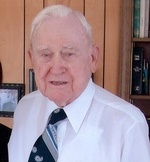 Lt. Colonel (Ret) James Edwin Williams, age 94 of Troy, Alabama died Tuesday, January 29, 2013 at his home.
A full military memorial service for Col. Williams will be held in the chapel of Green Hills Funeral Home in Troy on Sunday, February 3, at 2:00 p.m., with the Rev. David McVay officiating. Visitation will be Sunday, February 3, from 12:30 p.m. until 2:00 p.m.  at Green Hills. Graveside services will be held at the Oak Grove Cemetery in Maxton, NC on Sunday, February 10, at 3p.m. with Dr. Robert S. Dendy officiating.
A highly decorated and honored veteran Col. Williams entered the Air Force in 1937. During WWII he served as a pilot and operations officer with the 155th Photo Reconnaissance Squadron, flying low-level nighttime reconnaissance missions to document the location, strength, and movement of German troops, equipment and transport.  Col. Williams was a pilot during the Korean Conflict, served as the Air Force Advisor to the Alabama National Guard and taught at the Air Force Command and Staff College.
In 1963 after 26 years of service Col. Williams retired at Maxwell AFB. He and his wife Adelene moved to Troy where he then spent 17 years at Troy State University as a Professor of Geography
Col. Williams graduated from Toomsboro High School in Toomsboro, GA.  He received his BA and Masters Degree at the University of Alabama Tuscaloosa.  Moving to Troy in 1967 he was a well known, involved and highly respected member of the  community.  Col. Williams was a  member of  The First United Methodist Church of Troy.  He was active with the Troy Lions Club for numerous years, serving several terms as president and holding other offices. He was the Director of Veterans Affairs with the State of Alabama, active with the American Legion and member of the Sons of the Confederacy.   Col. Williams was an avid angler, marksman, hunter, woodworker and photographer. He and his wife were members of the Troy Country Club for over 40 years, were members of Classics, Troy Arts Council and avid supporters of Troy University academics, arts and athletics. Col. Williams was a member of Sigma Pi Greek fraternity and he served as a faculty advisor
Col. Williams is preceded in death by his loving wife of 63 years Adelene Steed Williams. Sisters Dorothy Fenton, Mary Fouch,  Marjorie Simmons and Velma Wohlford and parents Tully and Pearl  Webb Williams.
He is survived by his daughter, Darda Williams Kerfeld (David) of Lookout Mtn., TN; grandson, Michael S. Kerfeld of Atlanta, GA and numerous nieces and nephews.
The family would like to give special thanks to the caregivers, Neet and Jerry Coleman, Jean Thompson, Patricia Morris, Marlene Abram, Alacare Hospice and the staff and doctors at Southern Health Associates.
In lieu of flowers, memorials may be made to the First United Methodist Church in Troy.  Family and friends can sign the guest book on the website at www.greenhillsfuneralhome.net.  The staff of Green Hills Funeral Home is honored to serve the Williams family.

To order memorial trees or send flowers to the family in memory of James Williams, please visit our flower store.