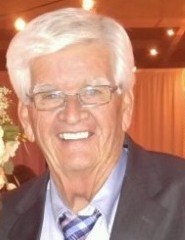 Bubba graduated from Charles Henderson High School Class of 1966 and went on to pursue a degree with Troy State University in financial administration. He hired on with Couch Construction Company and took to life on the road working resurfacing projects across the Southeast.

Some superstitions linger, the lure of mischievous behavior around the cycle of a full moon, the luck of black-eyed peas in the New Year, or even the enigmatic of a Friday the 13th. But for Bubba and Bennie, Friday the 13th always rang sweet. There he was on the roadside working an 18-mile stretch in Raleigh, Mississippi, December 13, 1975, when he met Bennie Curtis. Nothing would suit him more than a date, and she obliged. Bubba was a Southern gentleman and prided himself on punctuality and politeness. He thought there was no greater waste of a person’s time than when they were waiting on you. But on that first date, in his pristine, green El Camino, Bubba was late, and Bennie didn’t mind, all she had was time if it meant, after the wait, it would be spent with “My Bub”. When his construction project came to an end, Bubba asked Bennie to go with him. Bennie said she would but only if he would marry her, and Bubba thought “he could do that.” After nine months of exciting courtship, Bubba and Bennie married on August 14, 1976. They shared a life of love and adventure, taking trips and appreciating the outdoors. One of their favorite destinations was to the Chewacla State Park in Auburn, Alabama, where they would hike to the waterfalls and enjoy a picnic by the stream.

In Troy, Bubba owned and operated Pike Auto Parts until the business climate changed to a more corporate operating system. Bubba sold the store and everything in it and was so grateful to have been afforded the opportunity by Kenny Campbell to come and work at the Sanders companies as the Parts Manager. Bubba came with a few guarantees. First, he most always could be found enjoying a pack of Lance peanut butter crackers and a cold Dr. Pepper. Second, he could be found behind the wheel of a Lincoln Town Car that he found most accommodating to his tall stature. And third, he was a spirited and convincing Alabama fan, which played tribute to converting his Mississippi nephews to cheering Roll Tide. Bubba was a good man – faithful, hardworking, and devoted. Memories of him will be fond with every nibble of cracker or fizzy sip of Dr. Pepper and cherished in the sights of a pretty trail. Pack a snack and take a stroll, for Bubba and Bennie.

Mr. Jinright is survived by his wife of 44 years, Bennie C. Jinright; sister and brother-in-law, Pam and Steve Rawlins of Chelsea, AL; nephew, Brad Rawlins (Elyse) of Chelsea, AL; and two great-nephews, Levi and Leo Rawlins; and numerous other nieces and nephews. He was preceded in death by his parents, Howard Jinright, Sr. and Annie Mae Bassett-Jinright. Bubba and Bennie didn’t have any children, but they have acquired an abundance of family throughout the Troy community and feel blessed to be able to call their City of Troy work friends and Southside Baptist Church fellows family.

Flowers are accepted or charitable contributions can be made in his honor to the Southside Freedom Campaign (522 South Brundidge Street, Troy, AL 36081). Friends and family can sign the guestbook online at www.greenhillsfuneralhome.net. The staff of Green Hills Funeral Home is honored to serve the Jinright family.

To order memorial trees or send flowers to the family in memory of Howard “Bubba” Jinright, Jr., please visit our flower store.