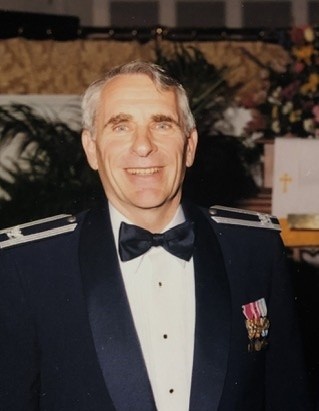 Dr. William E. "Bill" Flinn, Jr. age 76 of Troy died Friday, February 7, 2020 at his home. Bill was born in Ohio to the the late William E. Flinn and Dorothy Bacon Flinn. He was also preceded in death by his wife of 32 years, Marcy Flinn and  a brother Mac Flinn.

A memorial service for Bill Flinn will be held Sunday, February 9, 2020 at 2:00 PM from the Shady Grove Methodist Church with Reverend Kathy Fisher officiating. The United States Air Force will provide the Military Honors at the church. Visitation will be held 30 Minutes prior to the service at the church.

His survivors include; his wife , Jewel Flinn of Troy, his children, Kevin (Chris Manning of Greer, SC, Douglas (Shirley) Flinn of Monument, CO, Angela (Jeffrey) Carver of Morgantown, WV,  his 9 grandchildren and 2 great-grandchildren, and his sibliings, Celia Flinn and Ned Flinn

Colonel William E. Flinn, Jr. served in the U.S. Air Force for 22 years, retiring in 1989 as the Group Commander of the 3350 Technical Training Group at Chanute AFB, Illinois.  The recipient of the Legion of Merit and numerous medals, Col. Flinn served proudly in the Air Training Command, developing ROTC curricula, serving at Headquarters Pacific Air Command, and leading the Community College of the Air Force as Commandant.”  Bill had a PHD in technology and After retiring from the Air Force Bill was the Vice Chancellor of Technology for the Troy University  systems

Flowers will be accepted or memorials may be made to your favorite charity.

The staff of Green Hills is honored to serve the Flinn family.

To order memorial trees or send flowers to the family in memory of Dr. William Flinn, please visit our flower store.