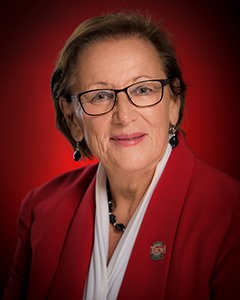 
In 1991, Dr. Laliberte came to Troy University as a professor of marketing and served in that position until 2005. In 2000, she was named the Associate Vice Chancellor for Development and served in that position until her retirement in 2017. Prior to her relocation, she held the positions as an Instructor of Marketing with Clemson University (1974-1981), Associate Professor of Marketing, Western New England College (1981-1987); and Associate Professor of Marketing and Finance with Elms College (1987-1991). Jean was a spirited patron of the Troy communities, contributing her time, expertise, and unwavering determination to the betterment of every organization of which she was a part. And there weren’t many to which she didn’t contribute. Her community involvements include serving as the local chapter and state treasure of Alpha Delta Kappa Sorority; Troy Rotary; DAR; secretary of the Troy Arts Council; Troy Arts Auxiliary; Republican Women; Mortar Board; New Century Club; Female Factor; Troy Regional Medical Foundation; Troy University Legacy Council; and Park Memorial UMC Circle of Benevolence. She received numerous awards for her collaborations, participation, and fundraising, most notably the National Honorary Troy University Alumna, 2017; C.A.S.E. paper awards (2005-2017) – Grand Award 2012; and her works to raise $256 million for Development (2000-2017). Socially, she was a strategic Bingo player, great carrot cake baker, and one of the greatest Troy Trojans found around town.


In lieu of flowers, donations may be made out to the Troy University Foundation for the Dr. Jean Laliberte Scholarship (301 Adams Adm Bldg Troy, AL 36082 or 334-670-3608 ) or to the Park Memorial United Methodist Church, (P.O. Box 1291, Troy, AL 36081). A livestream of her service will be available for viewing. Friends and family can sign the guestbook online at greenhillsfuneralhome.net. The staff of Green Hills Funeral Home is honored to serve the Laliberte family.

To order memorial trees or send flowers to the family in memory of Dr. Jean Laliberte, please visit our flower store.