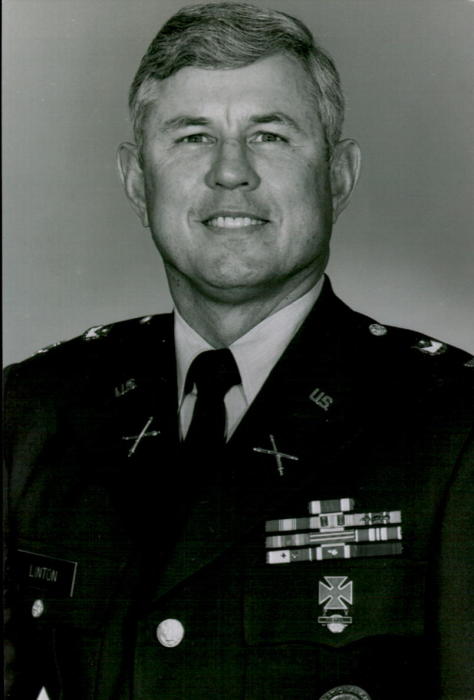 Col. Daniel A. Linton, Jr., age 89, of Montgomery, Alabama, passed away Wednesday, March 3, 2021. A graveside service will be held Tuesday, March 9, 2021, at 2 p.m. in the Green Hills Memorial Cemetery Veteran’s Garden with Reverend Rick Hayes officiating. Serving as pallbearers will be Lane Linton, Dane Linton, Jamie Hartford, Dan Stokes, Taylor Oliver, and Terry Linton. Honorary pallbearers will be Jordan Hartford, Titus Hartford, and Peter Martin. Visitation will be one hour prior to the service at Green Hills Funeral Home. State health guidelines will be implemented for all services, and masks are suggested for attendance.

Way back when, in a rural stretch of Pike County called the Goshen community, Daniel Linton, Jr., dubbed “Buddy,” was brewing big plans for his future. He was studying at Goshen High School Class of 1948 (or perhaps 1949, a detail blurred through the execution of his subtle exit plan) when he was inspired by patriotism to “fudge his age a little” and join forces with the Army National Guard 933rd Field Artillery Battery Company C in Troy. He went on to graduate in 1979 from the Army War College in Carlisle, PA, earn a BS and MS in economics from Auburn University, and achieve his PhD from the University of Tennessee. Col. Linton is said to have done everything professionally. He was a livestock economist with the Auburn Extension Service where he was instrumental in the development of the Feeder Pig Sale and Greater Feeder Cattle Associations and retired after 31 years in 1991, a career military man retiring from service in 1992, a near lifelong livestock and crop farmer, and an agribusiness entrepreneur and mentor. Col. Linton garnered countless titles and merits along his path, but his most cherished designation by far, was “G-Daddy.” For his grandchildren, he was an admirable mentor and counselor of wisdom and one of their greatest encouragers. He was immersed in continuous education, an avid reader, and gifted conversationalist always stimulating thoughtful discussions in quiet voids. Col. Linton was a world traveler, embracing many different cultures and taking in some of the most notorious sights across the globe in leisure. Just recently, he was fine tuning his memory of the Chinese culture and longed for another adventure to one of his favorite destinations, Hong Kong. He was a great handyman, skilled in the fine art of tinkering, and a guru of all mechanical parts. Col. Linton lived intently and purposefully. He lived and lived well.

Flowers will be accepted or memorial contributions may be made in his honor to the Glenwood United Methodist Church General Fund PO Box 53, Glenwood, AL 36034. Friends and family can sign the guestbook online at www.greenhillsfuneralhome.net. The staff of Green Hills Funeral Home is honored to serve the Linton family.

A Memorial Tree was planted for Daniel

To order memorial trees or send flowers to the family in memory of Daniel Linton, please visit our flower store.