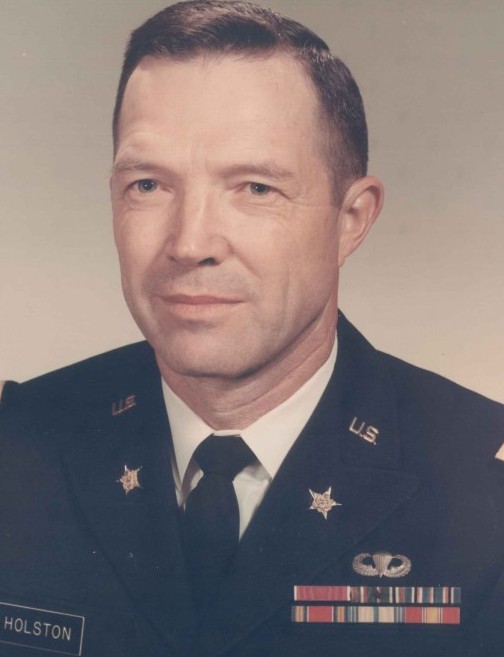 Colonel Alfred Holston, age 94 died Thursday , September 24, 2015 at his home. Colonel Holston was born in Akron, Alabama November 16, 1920 to Robert Jefferson Holston and Virginia Hafner Holston. He received his BS degree in Chemical Engineering from the University of Alabama and a Masters Degree in Bio-Radiology from the University of California at Berkeley. He entered the United States Army in 1943 and served for 27 years until his retirement reaching  his final rank of Colonel. During his military career he served during World War II with the 13th Airborne Division, he worked with the Antimissile Defense System at Redstone Arsenal in Huntsville and also at the Pentagon. He later was the Director of Missile Intelligence at Redstone Arsenal. He received the following medals during his 27 year career; the Legion of Merit with Oak Leaf Cluster, the National Defense Service Medal,  the American Theater Medal,the Victory Medal and a Bronze Star.

A Funeral service for Colonel Alfred Holston will be held Tuesday, September 29, 2015 at 2:00 PM from the Chapel of Green Hills Funeral Home with Dr. Luke Lane, his granddaughter Minister Jane Adams officiating. His Eulogy will be given by his daughter, Kay Smith and a reading of his military record by his grandson Joshua Smith. Visitation will be held Tuesday from 1:00 PM until 2:00 PM at Green Hills Funeral Home. Following the chapel service the flag draped casket will be transported by Carriage to the graveside where Full Military Honors will be performed by the United States Army Honor Guard.

Colonel Holston's family would like to thank his caregivers, Lolitha Orum, Sharon Thompson, Voncile Green and Keisha Shepherd for the wonderful compassionate care they have given Colonel Holston for the last 5 years and also a special thanks to the Troy Bank and Trust Trust Department for the work and help they have done on his behalf.

The staff of Green Hills Funeral Home is honored to serve the Holston Family.

To order memorial trees or send flowers to the family in memory of Col. Alfred Holston, please visit our flower store.