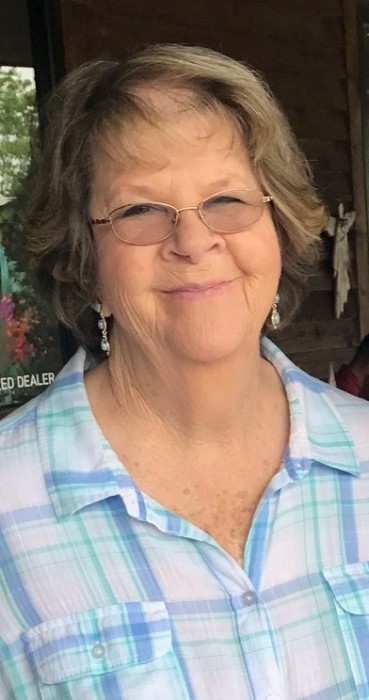 Carolyn Joyce Goodson, age 77, of Montgomery, Alabama, formerly of Troy, Alabama, passed away July 7, 2021, at home. A funeral service will be held, Tuesday, July 13, 2021, at 2 p.m. in the chapel of Green Hills Funeral Home with Reverend Wayne Locklar officiating. Burial will follow in Green Hills Memorial Cemetery. Visitation will be one hour prior to the service at the funeral home.

Carolyn haled from the high side of her Tallassee hometown, a young teenager raised through wartime and captured by the allure of a handsome Army-man, James, from the town’s farming community who was working extra hours with her father. After a compelling six-month courtship, he convinced her to marry, and at 14, she whisked away, a happy blushing bride. Roughly 10 months in to their marriage, James was advancing his studies at Auburn University and Carolyn was tending house and nurturing their quickly growing family. He re-enlisted with the United States Army to make a stable life for their family, and Carolyn journeyed the world as an Army wife, proud and patriotic, and embracing the chance to help her children experience cultures most only get to read about. They spent time in Turkey, Ethiopia, Israel, Greece, Texas, Maryland, Kentucky, and West Virginia, all stays yielding happy memories, but Ethiopia being her most beloved destination. Her travels to and from different bases and towns cultivated a great gift for sprouting friendships and fostered a genuine need for community involvement. During her tenure in Troy, Carolyn immersed herself in service and fellowship with Good Hope Baptist Church, often chauffeuring the ladies’ groups for weekly lunches at Sister’s Restaurant and to neighboring towns for market visits. Carolyn, beloved as “Nana,” carried a legacy of presenting the most delectable banana pudding. Her “Nana pudding” was no whip, perfectly fluffed meringue, scooped out with tons of love. She appreciated the beauty in her surroundings, admiring the shady blooms from her Hosta Lilies and the vibrant red from summer geraniums and green of porch ferns. She was an impassioned animal lover with particular affections for the small herd of cattle she and James tended in Troy and her last two K-9 companions, Buster and Izzy. She loved bird watching and replicating their wonder through canvas painting. Carolyn also appreciated good fashion and accessories, long scavenging for stylish digs at one of her favorite retailers, Stein-Mart, where the perfect blouses and shells, and rings for every occasion could always be found. She was strong and brave and intent in her actions. Carolyn, who recently began her battle with bone marrow cancer, was a fighter and ran her race well and is most certainly enjoying her Heavenly victory.

In lieu of flowers, memorial donations can be made in her honor to Paralyzed Veterans of America (PO Box 758589, Topeka, KS 66675-8589/pva.org) or to Agape for Children (PO Box 230472, Montgomery, AL36123-0472/agapeforchldren.org). Friends and family can sign the guestbook online at www.greenhillsfuneralhome.net. The staff of Green Hills Funeral Home is honored to serve the Goodson family.

To order memorial trees or send flowers to the family in memory of Carolyn Goodson, please visit our flower store.