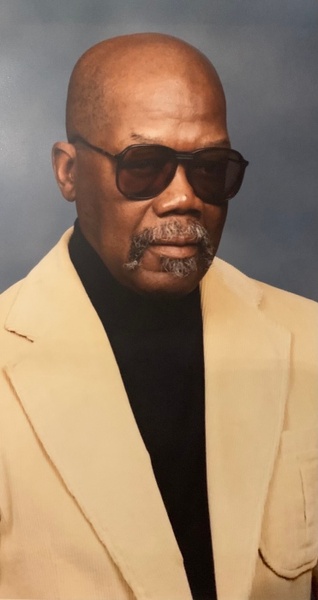 Calvin Edmonson, age 96, of Troy, Alabama, was called to eternal rest Tuesday, June 29, 2021, at home surrounded by loved ones. A celebration of his life will be held Friday, July 9, 2021, at 10 a.m. in the chapel of Green Hills Funeral Home with Pastor Samuel Green officiating. The family will receive friends for fellowship following the service.

Calvin was busy—he started that way, stayed that way, and finished his course just that way, busy. He was born in Louisville, Kentucky, and then migrated with his family a short drive northeastward. He settled in and called Cincinnati his home. He graduated from Withrow High School in Cincinnati before fulfilling his patriotic duty and enlisting with the United States Army on December 10, 1942. While serving his country in World War II, Calvin received numerous awards for his valor including the American Theatre Ribbon, the Asiatic-Pacific Theatre Ribbon with three Bronze Stars, the Philippine Liberation Ribbon with one Bronze Star, the Good Conduct Ribbon, and the World War II Victory Medal.

After his honorable discharge on January 16, 1946, he returned to Cincinnati where he married his childhood sweetheart, Ruth Ray, and began boxing professionally under the name, Eddi Vino. He and Ruth had three beautiful children together, Marie, Hope, and Bruce. After the death of his first wife, Calvin met his soul mate Dorothy McGrady, a model in one of his art classes at the Cincinnati Institute of Art. Some of his works of art have been immortalized by his favorite teacher, Dr. Michael at Miami University, where they are still on permanent display.

Winning Dorothy’s hand was one of his most acclaimed accomplishments and the start to a beautiful journey of life together. Their union produced several more beloved children, Jeffrey, Kim, Dorothea, Tonia, Georgetta, Michael, and Craig. During their marriage, Calvin re-enlisted with the United States Army to serve during the Korean Conflict and was again decorated and honorably discharged on August 31, 1961. Following his military career, his unwavering work ethic laboring two simultaneous jobs paved a path for their stability. He was a diligent serviceman with the United States Postal Service by day and plant operator for the General Electric Truck Pool through the night. His family recounts his Sunday routines, calling him “the man who slept on Sunday.” His day of rest was often in a recliner, with a single Stroh’s Beer, a ballgame, and a moment to rest his eyelids. Calvin retired in 1987 and he and his wife packed their bags to explore their next chapter in Woodland, California. Together they travelled the country visiting their children, visiting Napa Valley and Reno, and seeing all the sights in- between.

When Mrs. Dorothy fell ill, she expressed her desire to return to her family’s roots in Pike County, Alabama, and they purchased a tract of land where she longed to one day call home. After her passing in 1997, he upheld his promise to her and built a home and brought her to rest peacefully on the property. Calvin was a simple, honest, good man. He loved his wives, his family, his friends, his dogs, his beer, his sports (mostly the NFL, NBA, and the Cleveland Browns), and his soaps (unashamedly never missing an episode of the Young and The Restless or The Bold and the Beautiful). He burned feverishly with a fire for life and marched to his own assembly of an improvised jazz sound. Mr. Edmonson closed his book and did it just like Frank Sinatra sang, “I did it my way.”

The family wishes to extend many heartfelt thanks to the staff of Encompass Hospice for their attentive care and tremendous support through his transition, and special recognition to the doctors, nurses, and support team of Troy Regional Medical Center for their dedicated services and practice. In lieu of flowers, memorial donations may be made in his honor the American Cancer Society (PO Box 22478, Oklahoma City, OK 73123). Friends and family can sign the guestbook online at www.greenhillsfuneralhome.net. The staff of Green Hills Funeral Home is honored to serve the Edmonson family.

To order memorial trees or send flowers to the family in memory of Calvin Edmonson, please visit our flower store.