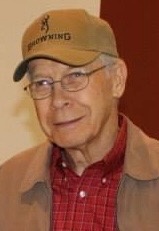 Bobby “Bob” Jefferson Outlaw, age 85, a lifelong resident of Pike County, Alabama, was called to eternal rest Saturday, February 26, 2022. A funeral service will be held Tuesday, March 1, 2022, at 2 p.m. in the chapel of Green Hills Funeral Home with Pastors Curtis Rich and Justin Jacobs officiating. Burial will follow in Green Hills Memorial Cemetery with Seth Watson, Josh Watson, Michael Outlaw, Slade Outlaw, Paul Messick, and Stephen Grissette serving as pallbearers. Honorary pallbearers will be Bryant Brown and Herman Jordan, the deacons of Bethel Baptist Church. Visitations will be held Monday, February 28, from 5 – 7 p.m. at Green Hills Funeral Home and again Tuesday, one hour prior to the service at the funeral home.

Bob was a homegrown friend known across the corners of Pike County, calling on families and providing a superior investment product as a notable Mutual Savings Life Insurance representative. He devoted his working lifetime to the industry, eventually retiring from Mutual Savings as the Regional Vice President. Bob also served twelve years as an elected member of the Pike County School Board, where he advocated on behalf of the children of Pike County.  His reputation earned as a businessman stemmed from roots of integrity, honor, and faith. That trio blossomed through a devoted membership at Bethel Baptist Church. Bob was a longtime deacon, shared in numerous church improvement projects, and was instrumental in founding the church cemetery trust and serving as its treasurer.

Bob kept busy even when he wasn’t busy – tinkering with tools and honing his woodman skills, manicuring a pristine lawn, and even doing his part to regulate the fish populations of the best local water holes. But mostly he was always busy tending his people and pets, especially Little Bit, the family cat. Grandaddy Bob, as he was affectionately known, was a giver and loved large from the depths of his heart. He was a Godly man, a family man, and a good man.

In addition to flowers, memorial contributions can be made in his honor to the Bethel Baptist Church-Banks cemetery fund (667 Enzor Road, Troy, AL 36079). Friends and family can sign the guestbook online at www.greenhillsfuneralhome.net. The staff of Green Hills Funeral Home is honored to serve the Outlaw family.

To order memorial trees or send flowers to the family in memory of Bobby “Bob” Outlaw, please visit our flower store.