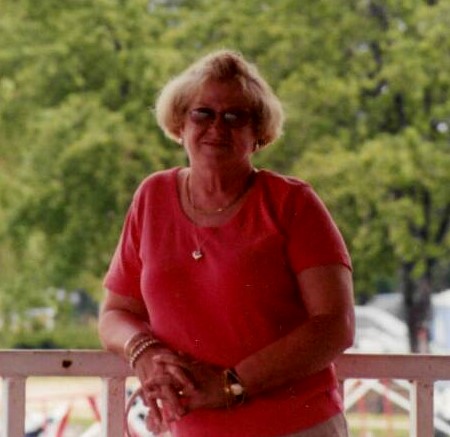 Barbara was a whirlwind of life and joy and adventure and excitement. She set out to see the world and experience its offerings and never missed a beat along her journey. Barbara came to know Charles, best known by his handle “Snuffy,” through a happenchance meeting at a truck stop along his regular route when she came “wheelin’ up,” tires blazing on her mustang and the two exchanged pleasantries then parted ways. Fate secured their forever when they crossed paths months later, and the rest of the story, as they say, was history (and for only the walls to know).

The trucking business relocated them to Troy in the 1970s where Charles secured a driving position with Hudson Industries and Barbara went to work as a seamstress for Pike Manufacturing for 25 years until the factory’s closing. Her newfound time brought a new title, handle “Wayward Lady,” and a new position as Charles’ driving partner. The two conquered the country, driving the roads through countless American cities and falling in love with the nostalgia of hidden gem towns. Barbara drove for five years with Hudson Industries, then she and Charles joined Old Dominion Freight Line, where she was recognized as one of their first female truck drivers, for another seven years before retiring in 2007.

Her love for travel extended beyond work, as she often shared trips and camping expeditions with her sisters. For Barbara, every day was “just another day in paradise,” but especially those days she spent exploring. Her best quests were traveling as “Grandmother” alongside her granddaughter with whom she took in all the sights and signs and shared her most favorite soundtracks to include the Supremes, Janice Joplin, and the Eagles. Barbara’s favorite place was always home to take in the wonder of her lush floral landscape and goodness of fellowship with family. Even when life presented lemons, she made lemonade, and she made it all the sweeter by constantly reminding her family, “we always make it through, together.”

The family wishes to extend heartfelt thanks to the staffs of Haynes Ambulance of Troy, Spring Hill Volunteer Fire Department, and Hospice Compassus for their attentive care and prompt support and to Steve Mahaffey for the preparation of delicious food. In lieu of flowers, charitable contributions may be made in her honor to St. Jude Children’s Research Hospital (501 St. Jude Place, Memphis, TN 38105). Friends and family can sign the guestbook online at www.greenhillsfuneralhome.net. The staff of Green Hills Funeral Home is honored to serve the Ellenburg family.

To order memorial trees or send flowers to the family in memory of Barbara Ellenburg, please visit our flower store.