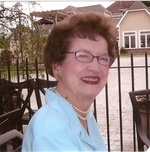 Adelene Steed Williams, age 89, of Troy, Alabama, died Monday, June 11, 2012, at her home.
A memorial service for Mrs. Williams will be at the First United Methodist Church in Troy on Wednesday, June 13, 2012, at 2 p.m., with Rev. David McVay officiating.  Graveside services will be held at the Oak Grove Cemetery in Maxton, NC on Saturday, June 16, 2012 at 3 p.m. with Dr. Robert S. Dendy officiating.
Mrs. Williams was the Secretary Vice Commander of Tactical Air Command at Langley Air Force Base in Virginia, a Graylady volunteer at an Army Hospital in Tokyo, Japan, actively involved in the Air Force Wife’s Club and taught school for a number of years at Charles Henderson High School in Troy, Alabama.
She attended Montreat College in North Carolina and graduated from the University of Alabama with a Bachelor of Arts degree.
Mrs. Williams married her husband, James Williams, on November 19, 1949. She was heavily involved in the Troy community as a member of the Velma Carroll Circle, the Birthday Club, The Classics and was also a very good Bridge player. She was a member of the First United Methodist Church and was an avid supporter of Troy University.
She is survived by her husband, U.S.A.F. Lt. Col. (Ret) James E. Williams of Troy, AL.; one daughter, Darda Ann Kerfeld (David) of Lookout Mountain, TN.; one sister, Thelma Betts Gwinn of Maxton, N.C.; two brothers, Wiley Dockery Steed and Harold S. Steed of Maxton N.C.; and one grandson, Michael S. Kerfeld of Atlanta GA; numerous nieces and nephews.  The family would like to especially acknowledge a special friend and caregiver, Mildred Hobbs as well as Cornelia Coleman, Jean Thompson, Dorothy Green and Patricia Morris.
In lieu of flowers, the family request contributions be made to Alacare Hospice or to the First United Methodist Church in Troy, Alabama.
Friends can sign the guest book at www.greenhillsfuneralhome.net. Green Hills Funeral Home is honored to serve the family of Adelene Williams.

To order memorial trees or send flowers to the family in memory of Adelene Williams, please visit our flower store.