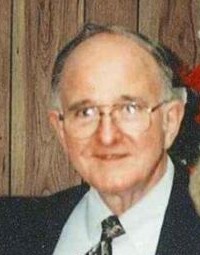 Dr. William “Bill” Dorman Allen, a lifelong resident of Troy, Alabama, passed away Thursday, April 14, 2022, after a fruitful and diverse 96 years of life. A graveside service will be held Tuesday, April 19, 2022, at 11 a.m. in Green Hills Memorial Cemetery with Reverend Mack Lowery officiating. Visitation will be one hour prior to the service at Green Hills Funeral Home.

Bill was raised down yonder in the Spring Hill community. In the 1920s and 1930s that was a bit of a long stretch from the thriving town of Troy, but not so far that the wind-up phone operator couldn’t reach the next rural register. He was the very definition of middle child. Mischievous and wild. He often found himself in a pickle; like the time he went plundering through the smokehouse only to be caught by his overalls and left hanging from a meathook, or when he coerced his youngest sister to dip her sweet potato in kerosene for a delicious snack. He was full of jokes and quips, both endearing talents he maintained through the years.

He was called to serve his country during WWII, a gunner in the United States Army, and he could often be caught recounting his missions where he was perched in the tiny pocket of an airplane firing heavy weapons and countless rounds of ammunition. He later re-enlisted in the United States Air Force where his passion for aviation brewed. Flight in service turned flight as pastime and gave way to many a tall tale that were conjured through his pilot years. Some rumors still churn of trips to Cuba for boxes of fine cigars, and an impromptu landing right on the sands of Panama City Beach, Florida. Though the truth of those stories will forever rest with Bill and his passengers.

Bill’s quest into optometry was made possible by his GI Bill, and the fruits of his studies were heralded in his hometown. He established shop in the heartbeat of downtown Troy on North 3 Notch Street and opened his doors to serve the people of his community. He counseled and fitted multiple generations of clients and their families for more than 73 years. Every patient’s details were tracked on their own brown envelope and manually maintained until his retirement. His office was a gem itself, a stamp of bygone times and a treasure of history. When the metal curtain was drawn and Dr. Allen peered around the opening in his retro fret-patterned plaid coat, you knew the world would never be seen the same. His guarantee, “You gone see like a hawk.” Dr. Allen went on to be recognized and awarded as the oldest practicing optometrist in the US before his retirement in 2018.

Bill kept a regular schedule at the office and you could count on him to be home for a full-course dinner (that’s lunch for all you other generations out there) fit with all the fixins’ and trimmins’ and followed by a short recliner rest before returning to his duties. In his off-time, he kept touch with his agricultural roots and maintained a timber and fish farm through his years. Fish fries were a regular treat around his stomping grounds and just the thought of it wakens the senses with all the smells, sights, and sounds of flour shaking in a crinkled brown sack. Man, that’s good. He was a fixture with the local coffee clubs, often spotted with the McDonald’s group, enlightening enquiring minds and sharing priceless wisdom. His spirit was bright, generous, warm, much like a beautiful springtime day. If you heard last Thursday, the birds were singing which means the fish were biting, and you know Bill, it was just time for some fishing.

The family wishes to extend many thanks for the compassionate care and support from the staff of Encompass Hospice and unmeasurable appreciation to his faithful, longtime caretaker Ms. Pearl. In lieu of flowers, charitable contributions can be made in his honor to the Troy Shrine Club (P.O. Box 865, Troy, AL 36081). Friends and family can sign the guestbook online at www.greenhillsfuneralhome.net. The staff of Green Hills Funeral Home is honored to serve the Allen family.

To order memorial trees or send flowers to the family in memory of Dr. William “Bill” Allen, please visit our flower store.